When visiting the ProCorr Display & Packaging facility, you’ll see stacks of corrugated board and printing and die-cut machines in action. You’ll also find our Procorr’s Facility Manager Phil Stahl is navigating shipments or the production floor. Most of the time, he’s seen communicating with other team members through his walkie-talkie.

PHILS CAREER IN THE CORRUGATED INDUSTRY:

Phil began working with Tristate Container Corporation, the corporate umbrella to ProCorr Display & Packaging, about 27 years ago. He opted out to pursue a college education after graduating high school. Instead, he began working for TCC as a temp, working the second shift at 3 PM and ending at 11 PM.

Phil entered the temp position with no background in the corrugated industry. Shortly after beginning to work at TCC, he studied each piece of machinery. He would ask questions to machine operators at the time and observe the mechanics.

Soon he found himself working in multiple positions. Phil quickly became the guy who stepped in when machines were down an operator. While eager to help where he could, Phil shared, “The challenge was learning the machine, but once you mastered it and understood its capabilities, it became fun!”

Once promoted, he was involved in all stages of setup and production. ProCorr’s Facility housed two machines and a handful of team members at the time. He recalls his excitement to grow his career within the company. His goal was to bring the same company culture at TCC to the new Facility.

“Yea, I was excited about the promotion. I knew the position would have its challenges, but it would have its rewards too. I was looking forward to managing a new team and bringing the TCC culture to our Facility. ” Phil shared.

One challenging aspect of his job is moments during the day when multiple things are happening simultaneously. “It can be difficult to manage what feels like to be everything all at once, from deliveries to shipping to managing the staff, but it makes the day go by a lot faster!” he laughs and continues, “I would be lying if I shared I didn’t love what I do.”

Phil’s responsibilities include managing the facilities’ distribution and receiving materials. In addition to staff management and inventory control, he manages the AIB International program.

In those eight years, ProCorr’s Facility has been awarded the AIB award for food safety since 2014, and achieving that award comes with a lot of responsibility. 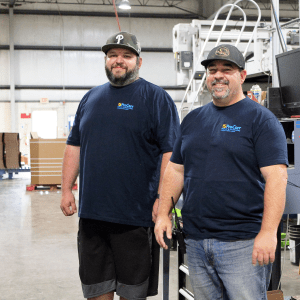 Phil Stahl, Faciltiy Manager, (right) is updated on a job as he walks the facility to ensure production runs smoothly.

However, before becoming an AIB award-winning facility, it began with two machines and a small team. Today, it houses nine machines and employs over 40 team members.

Phil arrives every day for his shift at 5AM on weekdays. He also visits the Facility on Saturday’s to ensure production runs smoothly and is ready for the week ahead. He shared, “Seeing what we produce in our Facility in the marketplace is rewarding. Our team and each department think of the customer; it’s something to be proud of.”

Outside of working at ProCorr’s Facility, Phil coaches a local baseball team.  “I enjoy encouraging the kids at practices and games; it’s a skill I learned while in management. I apply that same skill with the kids, trying to boost their confidence and applauding them for their efforts on the field.”

He continues, “There is a lot of reward in coaching. It joyous seeing the kids excited about a win or working together as a team.”

When Phil is not coaching, he spends time with his wife of 21 years, children, and friends. With no plans to retire anytime soon, Phil enjoys living in Bucks County for now. He enjoys the short commute to Philadelphia and surrounding states for a change of pace or scenery.