On the year anniversary, Chris shared what has improved in the design department in the last 12 months and what he looks to accomplish in the coming year.

Last June, Chris Lands joined ProCorr Display & Design as a Graphic Designer. He began assisting in-house designers. In addition, he began exploring marketing initiatives and website development, all within the first week. Since then, he has set to complete specific goals as well as help shift the dynamic into a thriving co-creation environment.

“I saw an opportunity within our team for collaborative learning. I find joy in understanding which opportunities allow for improvement and how. After ten months, we’re teaching one another, helping to improve our skills as a team.” Chris shares.

GOALS IN THE WORKPLACE

Chris’s initial goal was to establish department and design lab protocols. He noticed areas for improvement that he decided to tackle head-on, “If something doesn’t work for your team, have the dialogue and change it.” Chris continued, “We have established a judgment-free sharing space. Each week our team meets to discuss ideas, concerns, 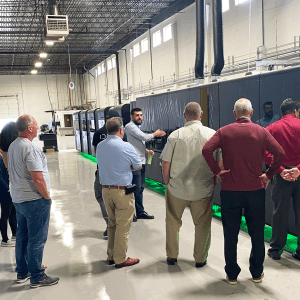 Chris gave the sales team a tour of our Solutions Center housing the digital press.

and needs openly, and it’s rewarding to see the collaboration happen naturally.”

Another goal was to develop a co-creation team, empowering them to think outside the box and expand their roles and opportunities. Chris thrives on pushing the limits and testing the best ways to position brands in the marketplace. His colleagues share the same belief, Chris shares “Collaboration throughout all the departments is pivotal, and we believe essential to success as a team and a company.”

After a few months, the design team quickly became his favorite element of being in the office, working well together and efficiently, which led to a positive work environment. Chris believes a positive workplace increases work performance and satisfaction while reducing stress. He quickly learned the value of a positive workplace at this first screen printing position, where he managed a two-person art department developing and shipping out designs every day, and working together was vital. He shared, “It’s all about communication and managing expectations, realistic expectations.”

A personal goal was to become a well-rounded graphic designer and expand his skillset. Throughout his career, he worked with materials in addition to corrugated such as wire, plastics, metals, and wood for local big-name companies. Some of his favorite displays are those he has completed for big names in the industry nationwide.

However, ProCorr’s focus material is corrugated, and one recent initiative leaves Chris interested and excited as the company moves in the direction of digital printing. Chris shared, “The Idera digital printer is what I’m most excited about, and being involved with a multinational team, both design and the Idera team is quite the opportunity. The project evolved from an idea to delivery, assembly, to training our staff.”

He looks forward to the printer becoming a part of everyday manufacturing. Currently, Chris spends much of his workday either in the ProCorr Design Center working alongside our team of designers or at the Solutions Center, learning all aspects of the Idera Digital Press.

Learn more about the company and our team, here.

Connect with us on LinkedIn, here.