Rocky began working at a box manufacturer in Philadelphia at seventeen. He began employment at another box manufacturing plant less than a year later. It was there where training on the corrugator and flexo machinery helped pave the way to other career opportunities – eventually becoming the point of contact in assisting supervisors when needed at the facility.

After learning about the ink processes, printing plates, and the manufacturing process of corrugated material, he became the Quality Control Manager. Soon, Rocky found himself accepting the position as the Facility Manager at ProCorr. To this day, he manages and oversees three warehouses. 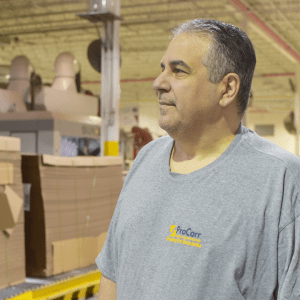 After experiencing growth from opportunities within his career, Rocky wanted to ensure that the same notion existed in his current role for his staff at ProCorr. Rocky shared, “Companies that focus on growth tend to have a more positive work environment.” He continues, ” I like to encourage my team in hopes it provides employee satisfaction.” However, keeping in mind that a change in one’s career can depend on the employee’s ambition.

He made it a point to connect the facility staff throughout the years, nominating those eager to grow within the company. “The goal is always to grow the company from within,” Rocky shared, and for him, that means his team should feel fulfilled in their jobs long-term.

Helping Others Grow Within The Company

For instance, Brian Rossello was initially hired as a machine operator. After expressing interest in learning and growing within the company, years later, he manages our ink room. Rossello develops the color processes for each project and displays before print (Learn more about Brian’s career here).

Jay Mendez is another example, as he was initially hired as a die-cut operator. Soon, Jay found himself learning more about the design department by sparking up a conversation with Rocky.

“Express interest,” Rocky shares, which is precisely what Jay (and others) had done.

Jay began training alongside other designers, learning and studying the industry’s ins and outs. In the last decade, Jay grew into a Structural Design position, and today he serves as a Design Manager at the Design Center. “I was really excited to see where Jay would go in his new position; to this day, it makes me happy to witness that growth,” Rocky said.

After working within the company for decades, Rocky has become a trusted resource and manager among his team members. There is mutual respect between him and his team. When Rocky contracted covid last year, the outpour of support from the group left him touched, feeling appreciated, and eager to return to the workplace.

After all, he’s worked with some of the staff since the mid-’80s. “Working at ProCorr, developing relationships with so many guys, continuous growth within the industry has been a huge part of my career, and I am thankful for that.” Rocky shared.

He continues to share, “Another thing I am thankful for is meeting the woman whom I would one day call my wife unexpectedly at work.” Rocky stated their meeting was a surprise and soon made efforts to court his then-future wife. Currently, they are both employed by ProCorr, work within the same building and even take lunch together.

Before he retires, he reflects on his time at ProCorr and the people he has come to call his second family. Rocky feels fortunate enough to work within a company with celebrated growth, and company culture is essential.

Stay up to date on more news from the company by visiting our NEWS page or following us on LinkedIn or Instagram.